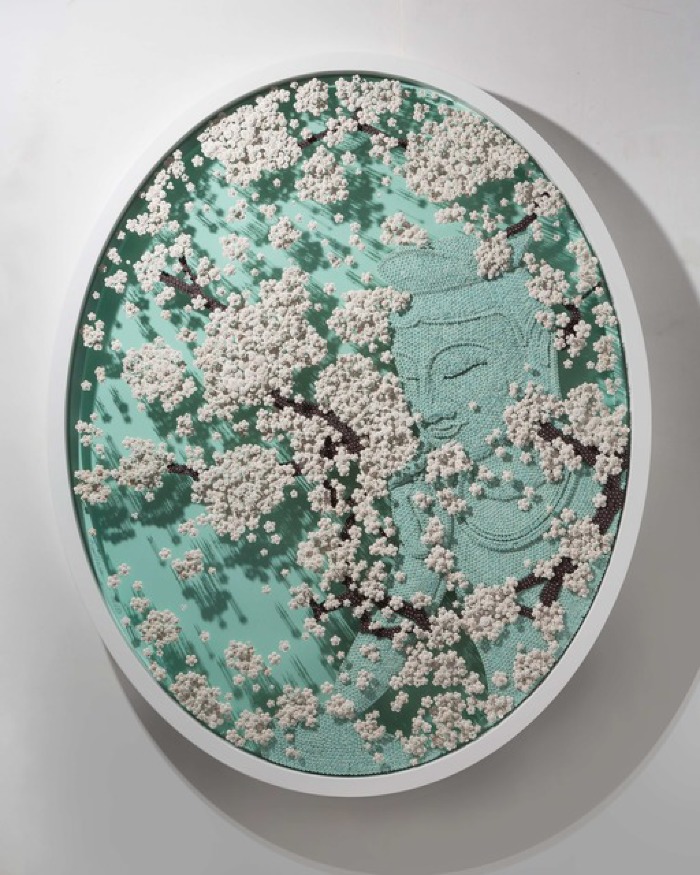 Buddha Falling in Love (2013)
Born in the Republic of Korea in 1960, Ran Hwang currently lives and works in both Seoul and New York City. She studied at the School of Visual Arts in New York City and attended the Graduate School of Fine Arts at Chung-Ang University in Seoul. Ran Hwang has exhibited at several international institutions including the Queens Museum of Art, New York; The Hudson Valley Center for the Arts, New York; the Chelsea Art Museum, New York; The Seoul Arts Center Museum; and The Jeju Museum of Art, Jeju Island. Hwang’s work is also a part of numerous private and public collections including The Brooklyn Museum, New York; The Des Moines Center for the Arts, Iowa; The National Museum of Contemporary Art, Seoul; and The Hammond Museum, North Salem, NY.
Ran Hwang creates large icons such as a Buddha or a traditional vase, using materials from the fashion industry. The process of building large installations are time consuming and repetitive and it requires manual effort which provides a form of self-meditation. She hammers thousands of pins into a wall like a monk who, facing the wall, practices Zen. Her works are divided into two groups. In the first, pins are used to hold buttons remain free to move and suggest the genetic human tendency to be irresolute. She chooses buttons, which are as common and ordinary as human beings. In the second group of works, a massive number of pins connect yards of thread creating a negative space of the presented images, threads suggesting connections between human beings and a communication network between seemingly unlinked human experiences. The filled negative space in the absence of the positive space suggests mortality at the heart of self-recognition.