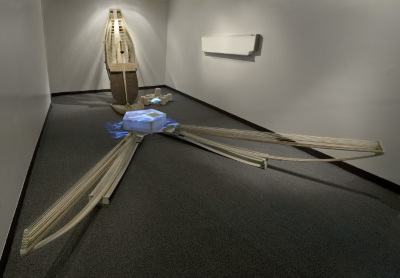 Luna & Thousand River (2014)
Choong Sup Lim is a contemporary Korean artist. He has had several gallery and museum exhibitions at institutions such as the National Museum of Contemporary Art, Korea and at the Museum of Contemporary Art, Sydney. (August 2016, OC)
My process deals with a desire to at once illuminate upon and bridge the divide between nature and culture. I am interested in the possibilities of creating a conjunction between the raw and the processed while attempting to explore the relationship between my experiences of the urban and the natural environment. My work occupies a space uncovered through my constant journeying from one world to another, wherein I am observing myself moving between nature and culture.There is a kind of a dialogue I find when such two seeming distinct world are bridged. I articulate this dialogue in minimalistic forms, rendered through a variety of mixed media that incorporates both the found and 'organic' and the man-made object. In my Scape-Fossil series, I have constructed what I consider to the time capsules that bear traces of memory, similar to pages of a kind of visual diary. Each capsule, so to speak, can appear to constitute autonomous fossilized perceptions of nature and culture. In their totality, the numerous capsules can be assembled to encompass a larger Scape-Fossil-this work therefore captures a sense-memory of space and time that are personal reflections of my journey between nature and culture. (June 2016 e-mail, artist)