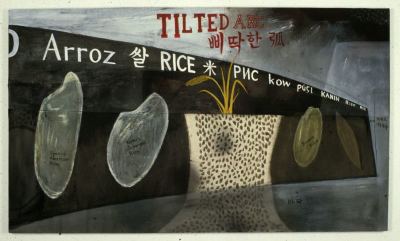 Rice Mural on Tilted Arc (1988)
Bahc Yiso was one of the most recognized Korean artists of the 1990s. After obtaining his BFA in painting from Hongik University in Seoul in 1981, he spent nearly fifteen years in New York before returning to Korea. ln the following years, his artworks increasingly garnered international attention and recognition. ln the late 1990s and early 2000s, Bahc participated in numerous art biennials and exhibitions in Asia, Europe, and the United States. Bahc's -oeuvre spans from his early paintings and collages that interplay Korean and English words and images to his later architectural installations and unassuming sculptures made of everyday materials that serve to disarm the viewer's confidence in the finite definition of place.
Simply because public art has to speak to a larger group of people, the artist needs to realize oneself not only as an independent creator who makes art of its own merit and power but also a service person who raises community issues and creates a sense of place. The specific content is very important, especially in the case of institutions like schools or hospitals, but visually entertaining and relaxing elements should not be sacrificed for any reason. ( Bahc, 1994)
A Digital Archive of Asian/Asian American Contemporary Art History > Mo Bahc
http://x-traonline.org/article/park-sang-yu-aka-mo-bahc-aka-bahc-yiso-1956-2004/