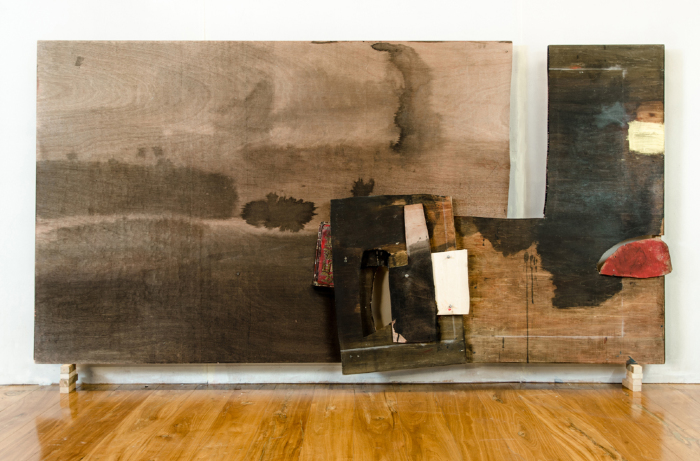 Shanghai Black (2014)
Korean-born, New York-based artist Sook Jin Jo has exhibited internationally since 1984, and has been the subject of 32 solo exhibitions, including “Walter Gropius Master Artist Series,” Huntington Museum of Art, Huntington, West Virginia (2011); “A Mid-Career Survey of the Work of Sook Jin Jo” at the Arko Art Center, Seoul, Korea (2007) and over 100 group exhibitions, including the “Lodz Biennale”, Poland; the “Gwangju Biennale,” Korea.

Her work is featured in the publications; “Art Parks” published by Princeton Architectural Press in 2013; “A Sculpture Reader: Contemporary Sculpture Since 1980” published by ISC Press/ University of Washington Press in 2006; and has been published in The New York Times, Art in America, Art News, Sculpture etc.

She is a recipient of by the Hachonghyun Foundation Artist Award in Seoul and a Korea Arts Foundation of America (KAFA) Award in Santa Monica, California. Also, a Pollock–Krasner Foundation Grant in New York; Socrates Sculpture Park Artist Fellowship in New York.

My interest in humble found materials began in the early 1980’s, originally out of necessity and financial hardship.  Since then I have been collecting discarded wood from the streets of New York, objects such as old doors, chairs, and plywood panels. These materials hold a great attraction for me because of their humble collective history and humanity.  With them I have explored infinite painterly, sculptural and architectural possibilities; creating compositions large in dimension, challenging and overcoming perceptions of gender and regionalism.

Over time, my work has extended to collaborative installations and public arts. As urban settings become increasingly multi-cultural and complex, my belief has been that public art can help create a more open integrated society.  Embracing the community, its culture and the characteristics of the site environment I have explored mediums such as performance, photography and moving images.  Whatever the medium, my work strives to evoke a meditative and contemplative experience in the viewer, engaging them both physically and spiritually.

Fundamentally environmental and deeply personal, I have tried to cast awareness on the subtle shift in materials we value by questioning the virtue of evolving industrial mediums and the conventional contemporary esthetics that influence our perception of the world around us.