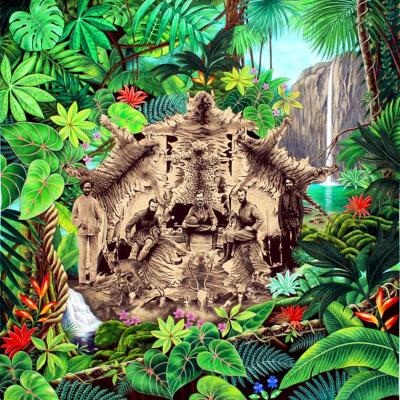 Trophy
Born in Seoul, Korea in 1954, Sung Ho Choi has lived and worked in New York City and Bergen County of New Jersey since 1981. He completed his BFA at Hong Ik University, Seoul, in 1980 and received his MFA from the Pratt Institute, New York, in 1984. Over nearly 40 years, his works have been shown across northern and central America and Asia. In 2008, he had a semi-retrospective exhibition titled, “My America,” at Amelie A. Wallace Gallery, SUNY at Old Westbury, New York. He had many solo exhibitions since 1984 and participated in several exhibitions which toured across the nation and abroad, such as “Infinite Mirror: Images of American Identity (2011-2014), “Asia/ America: Identities in Contemporary Asian American Art” (1994-1996) and “Across the Pacific: Contemporary Korean and Korean American Art” (1993-1994). Choi completed numerous permanent and temporary public projects including “Quiltroad” (2004), “Morning Calm” (1999), “My America” (1996) and “American Pie” (1996). He has received many awards, including the Pollock-Krasner Foundation Grant in 1995, the Artists’ Project Grant from the National Endowment for the Arts, the Rockefeller Foundation, the Andy Warhol Foundation for the Visual Arts, Inc., and the Award from AHL Foundation in 2005.
Beyond his creative endeavors, Choi works as a cultural activist, art educator and archivist.
"As a bicultural artist, I have depicted the experience of being the 'other', of contrasts and complexities of a minority existing within a majority. Emigrating to the U.S. from Korea had a profound effect on my art. I believe it has expanded my themes and medium.

Most of my work lies on the intersection between different cultures and traditions addressing critical issues of our society. "The way these cultures crash, conflict, destroy and heal each other seems to form certain patterns as do many natural cycles or physics of energy. My art making is the process of collecting, formulating those patterns and finding signifying systems within them. I seek alchemic discoveries in this process.

My artistic goal is to pursue the theme of contrasting identities in a society that is becoming more multi-cultural, and how to define this in 'universal' terms'."