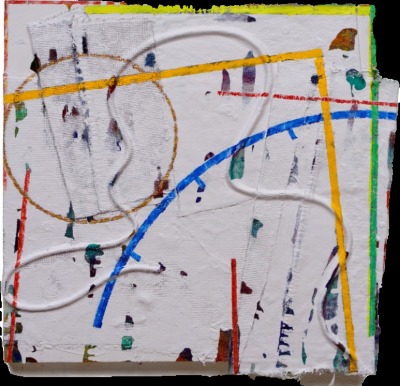 Untitled P1-14
Byoung Ok Min received a BFA from Seoul National University and an MFA from the Pratt Institute. Her works have been recognized through numerous major exhibitions in Korea and the U.S. Her works are included in the collections of the Aldrich Museum of Contemporary Art in Connecticut, the Chase Manhattan Bank, the Whanki Museum and other institutions. She was awarded the Pollock-Krasner Foundation Award for Painting in 1996 and the New York State C.A.P.S. Award for Painting in 1976-77.
In the nineties my works were large that was made with several small pieces of linen sewn together and stretched on a frame. I intended the sewn part as a physical line. I also made works folding pieces of linen so that they overlapped each other creating unstretched, roughly rectangular with irregular edges. These works in the show are a continuation of my interest in doing something physical on the flat rectangular surface, and also in layering the painted images. I use lines because they are the best way to make layering clearer and floating in space. These series of works are the first body of works that I consciously let the laminated canvas jut out of the frame. I like every element to be important to create the tension and energy I want from the texture and edges of cut canvas pieces to the accidental pockets of colors. When they are successful, very insignificant-looking things are as critical as the obviously dominant ones; I can say this is my way of creating equilibrium.