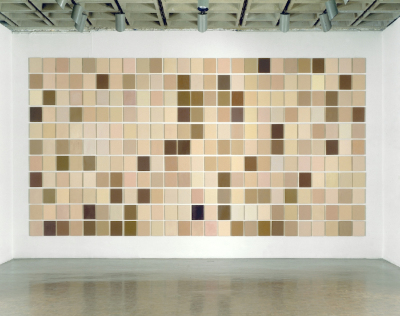 Synecdoche (1991-present) Oil and wax on panel
Like the artists whom he admires, Ad Reinhardt, Mark Rothko and Agnes Martin, Byron Kim works in an area one might call the abstract sublime. His work sits at the threshold between abstraction and representation, between conceptualism and pure painting. In his richly hued, minimalist works, Kim seeks to push the edges of what we understand as abstract painting by using the medium to develop an idea that typically gets worked out over the course of an ongoing series. His paintings often appear to be pure abstractions, but upon investigation and contemplation, they reveal a charged space that connects to the artist’s personal experiences and whose underlying ideas raise questions about issues from politics to environmentalism to cultural identity. Interviewed in his sunny Brooklyn studio, Kim quips, “I’m a painter until 2:00 in the afternoon when the daylight in my studio is so blinding that I become a conceptual artist.”

Synecdoche, Kim’s signature work, started in 1991 and exhibited in the Whitney Biennial in 1993, is in the permanent collection of the National Gallery in Washington, DC. This ongoing series consists of a grid of hundreds of small panels that each match to the color of a speci c person’s skin. It is both a portrait of people in the artist’s life and an exploration of race and community. Kim’s mid-career survey, Threshold traveled widely from the Berkeley Art Museum, CA to the Samsung Museum of Modern Art in Seoul and on to five other locations in the United States (2006/7). He was included in the landmark exhibition “Color Chart: Reinventing Color, 1950 to Today,” at the Museum of Modern Art, NY and Tate Liverpool, UK (2008/9). Kim's work from his Sunday Paintings series was on view at the Brooklyn Museum in the exhibition Unfolding Tales: Selections from the Contemporary Collection.

Byron Kim, born in 1961, is a Senior Critic at Yale University. He received a BA from Yale University in 1983 and attended Skowhegan School of Painting and Sculpture in 1986. He has received numerous awards including the Alpert Award, UCROSS and Joan Mitchell Foundation Grant and is a recipient of Guggenheim Fellowship in 2017.