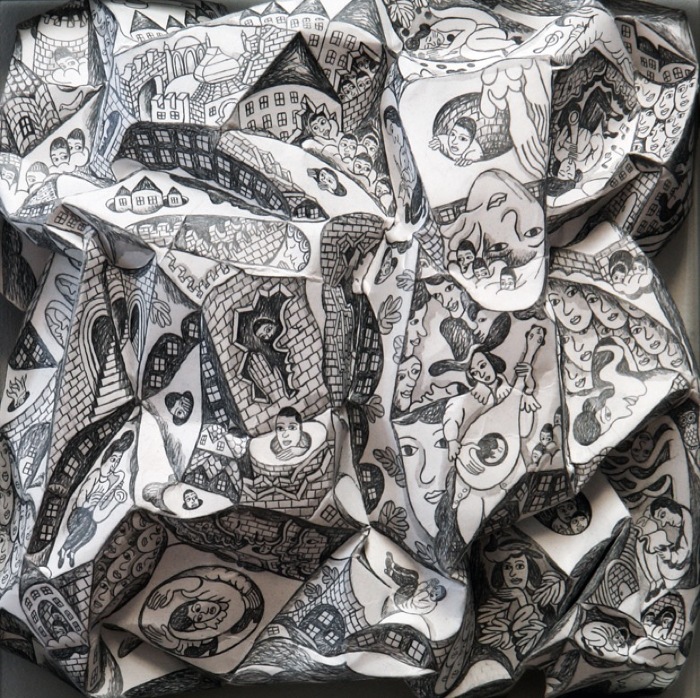 No. 2 "Il vecchio castello"
Eun Hyung Kim (born 1977, Seoul, South Korea) is based in New York, Chicago, and his hometown Seoul. Kim holds MFA degrees from the School of the Art Institute of Chicago, 2008, and Seoul National University, 2006. He also attended the Skowhegan School of Painting and Sculpture in 2007.  He has exhibited numerous times internationally, including Paris, Helsinki, Cologne, Chicago, New York, Tokyo, and Seoul. He has had several solo exhibitions at Gaia Gallery in Seoul and Gallery 400 in Chicago.
Eun Hyung Kim’s work narrates a twisted version of mundane life. Large-scale wall drawings, sculptural drawings, fabric works, and animations show doodling as an extended form of journaling. Using collected images from everyday life alongside private memories and pop culture, he tells a story that represents how simple but bizarre life can be. Kim notes that he sweeps out thoughts from his mind and pours those images into his work. This process of “sweeping out” makes very dense and crowded images, and it depicts his inner being, including details of his private memories. The process of expressing every thought, paradoxical as it may seen, is to empty the mind. Kim relates this to the very basic philosophical question: “Who am I”? Or, “Who are we”?  Kim repeats this practice by making numerous drawings, a process refers to as “Designing Egos.”