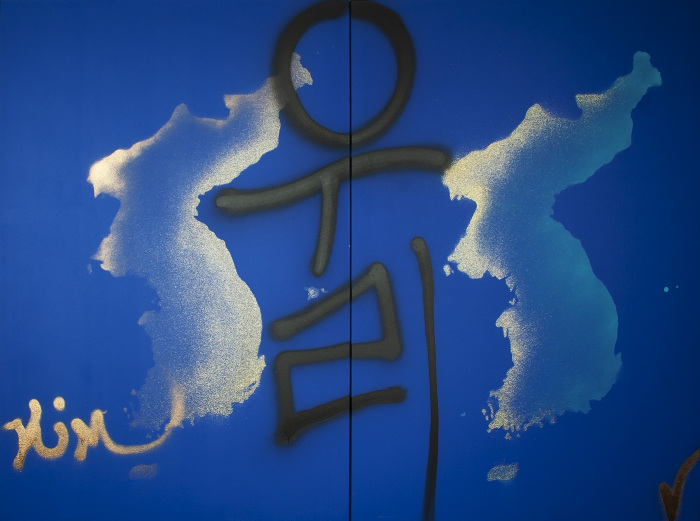 Dreaming Unification: Oori (우리) Protest for Peace (2019-2020)
Mina Cheon (천민정) (b. 1973, Seoul, South Korea) is a global Korean new media artist, scholar, and educator who lives and works between Baltimore, New York, and Seoul and exhibits her political pop art known as “Polipop” internationally. Being a part of the Korean diaspora, Cheon’s art results from a life-time of working with a postcolonial and comparative cultural lens and making contemporary art that is in historic alignment to appropriation art and global activism art, while focusing on North Korean awareness, Korean unification, and global peace projects. Along these themes, an ongoing project includes EatChocopieTogether.com, an interactive digital art piece created in collaboration with the Asia Society Triennial and her participation as a Triennial artist at the Asia Society Museum in New York and her current solo show is up at The Korea Society in New York till end of summer 2021. Cheon had solo exhibitions at the Ethan Cohen Gallery (2014, 2017-18, 2020-2021) and Lance Fung Gallery (2012) in New York; Trunk Gallery (2014), Sungkok Art Museum (2012), and Insa Art Space (2004-5) in Seoul, Korea; Maryland Art Place (2012) and C.Grimaldis Gallery (2008) in Baltimore. She has also exhibited her work and/or is in the collection at the Seoul Museum of Art, Noyes Museum of Art, Seoul Olympic Museum, American University Museum, Smith College Museum of Art, Baltimore Museum of Art, and participated in the 2018 Busan Biennale. Cheon is a Full-time Professor at the Maryland Institute College of Art (MICA) and currently the Associate Dean of First Year Experience and Faculty; she received her PhD in Philosophy of Media and Communications from the European Graduate School, European University for Interdisciplinary Studies, Switzerland; MFA in Imaging Digital Arts from UMBC: An Honors University in Maryland; MFA from the Hoffberger School of Painting, MICA; BFA in painting from Ewha Womans University.
While there have been inter-Korean efforts for reconciliation between North and South Korea, recent canceled peace talks coincide new spectacles of ongoing threats from North Korea and more tensions grow within the Korean peninsula that affects peace on earth. Mina Cheon’s art includes global peace projects and art activism as she makes artwork known as “Polipop,” connecting politics and pop art. Mina Cheon looks at certain geopolitical contested spaces or sociopolitical issues and create pop and social realism artworks in response. Mina Cheon’s practice draws inspiration from the partition of the Korean peninsula, exemplified by her parallel body of work created under her North Korean alter ego, Kim Il Soon, in which she enlists a range of mediums including painting, sculpture, video, installation, and performance to deconstruct and reconcile the precarious history and ongoing coexistence between North and South Korea. Mina Cheon aka “Kim Il Soon” is a dreamer and the mother of unification. In her dream worlds, she taps into her stream of unconsciousness to paint and promote a future of unity and peace. From the divided Koreas to the divided United States of America, desiring peace “over-there” in Korea echoes desiring peace “over-here.” Living in pandemic times, the artist believes that art must continue as a banner of hope and as an essential in life, as our countries remain divided. And, we do this with our social consciousness intact, with social justice and anti-racism efforts in the forefront, while dreaming unification and protesting for peace. Therefore, her recent dreaming painting series of  “Dreaming Unification Protest Peace” showcases works about dreaming the Korean national third flag known as the Unification Flag during the turbulent American political and economic times, enduring a global pandemic crisis and at the heightened #StopAsianHate movement.