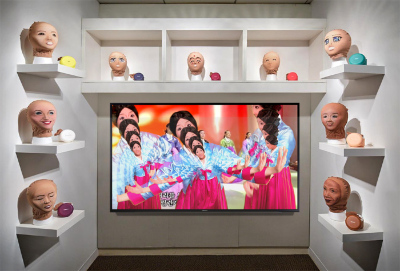 Thinly Worn, 2017
Valery Jung (정) Estabrook was born in Florida and grew up on an organic Asian pear farm in rural southwestern Virginia. She holds an MFA in Painting and Drawing from Brooklyn College and a BA in Visual Art from Brown University. Her artwork has been exhibited in major cities both domestically and internationally, including New York, Los Angeles, Lagos, Bilbao, and Melbourne. As a video post productionist, she has worked on a number of notable projects, including Beyonce's behind-the-scenes I Am: World Tour documentary video, and assisted the late Barbara Hammer with animation and video installations. In 2018 she received the Gold AHL-T&W Foundation Contemporary Visual Art Award, an annual award recognizing artists of Korean heritage in the United States. In 2020 she was a Vermont Studio Center Fellow and the Paula and Edwin Sidman Fellow at University of Michigan's Institute for the Humanities. She currently resides in Albuquerque and teaches classes in Experimental Art and Technology at the University of New Mexico.