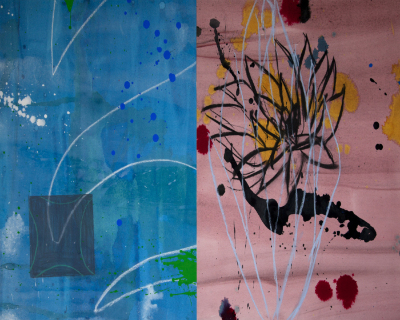 Lotus (1995)
Daru studied at Seoul National University, receiving her Bachelors degree in 1977. Daru moved to New York that same year to study at the Pratt Institute and received her Masters degree in 1980. Since then, Daru has been widely exhibited in the United
States and Korea, including the Bronx Museum of the Arts in New York, Hallwalls
Contemporary Arts in Buffalo, the Phillips Museum of Art in Pennsylvania, and the
BenShahn Galleries in New Jersey. Recently Daru has shown at 2x13 gallery, Allen
Sheppard gallery, Amy Simon fine art and Metaphor Contemporary Art, Kumho
Museum, Gallery BK, Galerie Caplain-Matignon.
Daru's exhibitions have been reviewed in numerous publications including, the New
York Times, Art in America, Art Asia Pacific, Asia Times, Art in Culture, Wolgan Misool, Arts Gazette, Space Magazine, New York Sun, Buffalo News, Golf Herald, Business Week and numerous local newspapers, radio and television. Daru is the winner of MTA Arts for Transit - Jamaica Line(Crescent Street Station). This project was completed in May 2007, and is a permanent installation. In 2011, Daru completed three monumental public art works in Korea for the LIG Insurance company. Daru is represented by gallery BK in Seoul, Galerie Caplain-Matignon in Paris, Amy Simon Fine Arts in Connecticut. (April 2016, Artist, AHL Questionnaire)
My work is a response to my fascination with the two different ways of seeing; the hidden and mysterious aspects of nature versus painterly reality. I like to bring together opposite elements in my diptychs because it poses as an inquiry to the different perspectives of life, spirituality and nature, leaving room for personal interpretations. In my single panel drawings and paintings, however, I like to create a harmony between the seemingly familiar cycles of nature and the human perception. The elements of nature, or certain sensations from nature’s impressions, are the starting point; the fleeting moment when a particular light changes the landscape and atmosphere. Certain sensations and memories from these particular moments – the fluttering of a butterfly, the splash of a raindrop, flickering lights through the morning fog – all encompass the emotional manifestation I attempt to create with my work. These motifs are then melded with the language of abstraction. Often times I use a variation of circles within circles and certain decorative patterns against a background to evoke the cycles of nature. The circles become patterns, the patterns become flowers and the flowers become patterns, and soon, the canvas starts it’s own imaginative journey into a hybrid of the natural and imagined world. I like to think that we are living in an eternally cyclical and ever-changing world. Interwoven with a subtle fabric of natural patterns in repetition, the piece represents the world as one in constant renewal and eternal return to a nonstop flux. I want to reveal the beauty of art making and the humble act of retelling. I want to share the poetry of space and the rhythms that invite quiet and spiritual meditation. (April 2016, Artist, AHL Questionnaire)