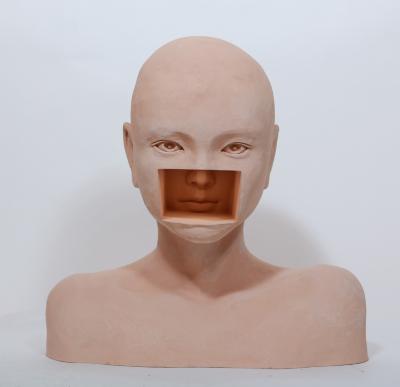 Dayeon Kim is from South Korea and obtained a BFA at Sungshin Women’s University, Seoul, and received an MFA in painting from Pratt Institute, NYC. Originally from Incheon, Kim currently lives and works in Brooklyn. Her work has an eerie disturbing quality which blurs the lines between fiction and reality, between humor and horror. Spending many years as a painter she is currently producing ceramic sculptures. All of her work provokes a new sense of awareness and questions the authenticity and the limitations of established social structures. Her work reflects a subtle sense of anxiety, which turns the world upside down and weaves a web of ideas both ironic, and disturbing, inviting people into her alternate universe.
She has exhibited several shows in NYC and Korea, presented performances at Brooklyn International Performance Art Festival, New York, Gwangju International Performance Art Festival, Korea, OPEN SPACE “Survival” Festival Berlin, Gallery Stiftelsen 3,14 Bergen, Norway, L´MONO Bilbao, Spain, Platform Vaasa, Finland, Livery Gallery, Marseilles, France.
My work often addresses the disorder which stems from the disparity between hereditary values passed on by ancestors and individual beliefs gained through personal experience. Through this collection of mutilated and reassembled bodies, I simultaneously try to evoke feelings of confusion and comfort by placing the viewer into an environment where they can form their own identity.
I make sculptures/installations which are hybrid forms of the human body. They show the erosion of the hierarchical structure between genders and highlight the social and political confusion inherent in contemporary societies. The influx of new ideas in today’s world shakes the foundation of traditional values and creates confusion that belief systems are constantly in flux and not absolute. Neither the current order of society nor individual values appear in existing forms. They arise in the abstract, in the monstrous, which embodies disorder.
Dissecting social structure and re-building environments which reference my own character is the underlying theme of my work. I use ceramic and clay sculptures to create disembodied fragments of ourselves which delicately provoke eerie emotions, where the familiar is presented in an abstract and unfamiliar way. My mission is to transform the body in a disorienting manner and to build awareness about how we see ourselves and others and to provide a thinking space to reimagine humanity and re-evaluate our own place in the world.
Dayeon Kim