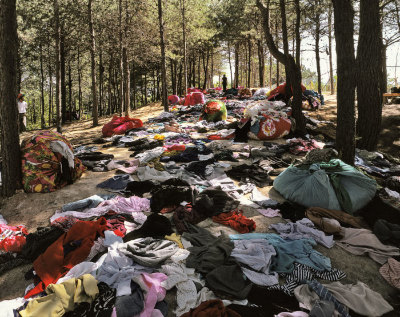 Kimsooja was born in 1957 in Taegu, South Korea. She earned a BFA (1980) and MA (1984) from Hong-Ik University, Seoul. Kimsooja has received the Anonymous Was a Woman Award (2002), among others, and has been an artist-in-residence at the World Trade Center, New York (1998); P.S.1 Contemporary Art Center, Long Island City (1992–93); and École Nationale Supérieure des Beaux-arts, Paris (1984). She has had major exhibitions at Los Angeles County Museum of Art (2009); Hirshhorn Museum and Sculpture Garden, Washington, DC (2008); Museo Nacional Centro de Arte Reina Sofía, Madrid (2006); Magasin 3, Stockholm Konsthall, Sweden (2006); Massachusetts Institute of Technology, List Visual Arts Center, Cambridge (2005); and other institutions. Kimsooja has participated in international exhibitions, including the Venice Biennale (2001, 2005, 2007); Yokohama Triennial (2005); and Whitney Biennial (2002). Kimsooja lives and works in New York.

Kimsooja’s videos and installations blur the boundaries between aesthetics and transcendent experience through their use of repetitive actions, meditative practices, and serial forms. In many pieces, everyday actions—such as sewing or doing laundry—become two- and three-dimensional or performative activities. Central to her work is the "bottari," a traditional Korean bed cover used to wrap and protect personal belongings, which Kimsooja transforms into a philosophical metaphor for structure and connection. In videos that feature her in various personas (Needle Woman, Beggar Woman, Homeless Woman), she leads us to reflect on the human condition, offering open-ended perspectives through which she presents and questions reality. Using her own body, facing away from the camera, Kimsooja becomes a void; we literally see and respond through her. While striking for their vibrant color and density of imagery, Kimsooja’s works emphasize metaphysical changes within the artist-as-performer as well as the viewer.