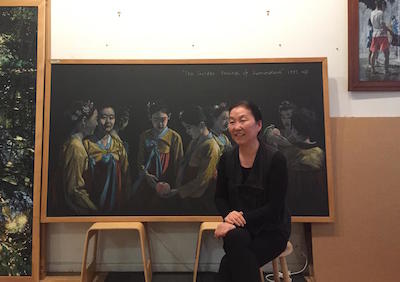 Can you briefly describe and tell me the most important criteria in creating your artworks?

“Important criteria that describe my works are ‘memories that are etched in my DNA’. My mother used to paint traditional “oriental” paintings and, most memorably, she painted an image of our home. The painting was comforting to our family members that were all living apart around the world. Whether we like it or not, we all are more mobile now and are able to live in places different from where we were born. This is just one of the characteristics of present day life. As an artist, I am trying to find and paint images that are or serve as anchors in our minds.”

You spent much of your childhood abroad, didn’t you?

“Yes and I think that living abroad influenced my works. My father was a diplomat. Moving every four years and getting used to new people and surroundings were traumatic experiences as a child. My works are inspired by these experiences.

I heard that you still love to travel?

“Yes, I love to travel. Luckily, my husband loves to travel too. So, that connects us. We both love driving and, in a way, two people sitting side-by-side and looking at the same scenery together seem to symbolize our life.”

Can you tell me about your two studios (in Korea and the U.S.)?

“We were looking for an abandoned schoolhouse in the countryside of Korea for clean air, beautiful surroundings and ample work space. Having studios in both places enables us to live a more flexible lifestyle which we enjoy. When we found the abandoned schoolhouse, I also found blackboard as a source material for my artwork.”

So, you found blackboard in your Korean studio?

“Yes. The blackboard is my chosen medium for my works of art, and it also has a symbolic meaning. That is, blackboards can be likened to our minds because as new facts, ideas and memories are added, others are erased or forgotten, and the process repeats. It was a happy coincidence that I found blackboards as a medium for my works.
In the schoolhouse studio, I used to block the cold wind with blackboards. On a sunny spring day, I thought maybe I should draw something, perhaps young children who might have studied in this space. I drew young children who likely might have been in the space, as my first blackboard painting — “Two Boys” — was purchased by the Whanki Museum.”

What makes the blackboard different from the canvas?

“Blackboard has a social meaning. For about 18 years of our lives, we use blackboards to study from elementary school to college. For me, a blackboard symbolizes a medium for learning.
In the late 19th century, people in Europe drew and wrote alphabets on blackboards when paper wasn’t available. In parts of India and Afghanistan, where paper still isn’t that common, many people still use blackboards. In many ways, our tablet computers are based on blackboards.”

Did you use oil pastels on the blackboards?

“Yes. Paint is too oily and is easily soaked into blackboards. As a result, it reduces color and brilliance. So, I researched materials for a while and tried to find a material that is similar to chalk. Picasso invented oil pastel with Sennelier, a French manufacturer, and oil pastels are very much like pastels except that they don’t erase. Compared to oil paint, oil pastels take longer to dry. But in one or two years, oil pastels eventually dry.

I like oil pastels because the colors keep their brilliance. As mentioned, I spent a lot of time researching the material because of possible health issues. In the end, I chose oil pastels as my preferred medium for many reasons.

Also, blackboard is an important medium for me because of its black background. Usually, we draw in black line on white backgrounds — we are drawing darkness; but when drawing on blackboard, I am actually painting light on the background. Drawing light is very significant for me.”

What about characters in the paintings?

I paint people in the neighborhood, and sometimes myself. The reason we could move into the abandoned schoolhouse was due in large part to rapid industrialization. As a result, only elderly live in the neighborhood. So, I painted people including an old lady and a mailman, but I later changed the old lady into a young woman who can bear a child.

Do you have certain types of characters in your selection?

Yes. I choose people that fit into my narrative. I give life to the things that are disappearing.

Can you tell me about the making processes?

When I choose characters from my surroundings, in a sense, I become the director. Other times, when I am preparing to make a self-portrait, I become the actor. And still other times, a photograph is taken by me or someone else and I may paint referring to the photograph but also add to it.
You told me that you wanted to be interviewed in front of this painting, why is that?

I went on a journey on the Trans-Siberian railway in 1997. These people in the painting are the third generation Korean people living there. In the past, Russia forced the Koreans to migrate, thinking that they may be spying on behalf of Japanese. So, in the 1930s, the Koreans endured a painful march. I heard about this history while on my travels. It is a tragedy, but I could sympathize with them because I also live away from my homeland — in New York City. We all share the sense of loss. The peach symbolizes cure and comfort. Some people think these women are comfort women, and that can be another way of interpreting this painting. When I graduated from Seoul National University and wanted to become a professional artist, it wasn’t an easy path for a woman at that time (1972). Seoul National University graduates and Ewha graduates gathered and formed an Expression Group. It is one of the first women artists groups.  We researched a subject and showcased our works in annual exhibitions. I used to participate often and the group continued for quite a long time.

What was challenging for you as a woman artist?

I guess the most challenging thing was when I first came to Pratt in New York and had not enough money (tuition). My roommate was an architect, and I used to teach her drawing. Also, I used to work in my friend’s café and worked for a newspaper. I worked for the newspaper for about a year and a half. Having a full-time job and pursuing my life to be an artist was challenging. At that time, my husband Tchah-Sup was making minimalistic artworks. He was studying the same triangle for 3 years, and that was stressful because I had to balance the real world time and artistic time. So, I quit my job and started my own business in fashion which enabled me to be more free. I studied fashion at Parsons School of Design for a while. Luckily, the business was successful and I was able to pay the debt in a year and buy this loft in 3 years.

So, you were always trying to pursue your art.

Yes. I tried to follow my passion even though I was doing other things. I was just doing what I had to do, but as I reflect, I think it all had an order.

When do you feel most rewarded?

When I create a satisfying work. Also, when I discovered that blackboard was the best material for me, with enormous potential.

What do you think about living as an artist couple?
Tchah-Sup and I both went to the Seoul National University, but he is 9 years my senior. Coincidentally, we worked at the same high school after graduation, and went to the same graduate school in New York — Pratt Institute. The best things about being an artist couple is that he also loves traveling and that he is 9 years ahead of me. He is my companion and sometimes a mentor. However, Tchah-Sup is not a compromising artist. So, my life was compromised, meaning that I had to work to earn money for the household.  I am pleased that I was able to resume making art after a few years.

What are you recently working on, and what is your next plan?

I feel that it is my time to take the leap. I don’t have any specific plan, but I am interested in earth works. I would like to make a mark in Nature.

What do you think about being called as a “blackboard painter”?

“At first, it bothered me a little, but it doesn’t anymore. It is a kind of a trademark, and I still have a lot to dig into.”

Do you have any advice for young artists who plan to study or work abroad?

The artist path is challenging wherever one lives but, nevertheless, we have to make artworks because it’s part of who we are. Everyone has different talent, so each must wisely figure their ways. But, I think artists need to be more flexible so that they won’t break.
Myong Hi Kim 김 명희
May 17 2016