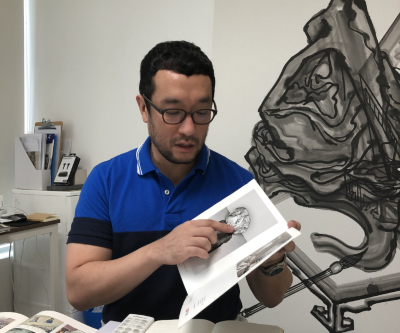 Interview with Eunhyung Kim by Suzy Taekyung Kim
2019 This interview has been edited for clarity.

Ahlfoundation: Can you start by introducing your earlier works? What was your inspiration for narrative drawings?

Eunhyung Kim: Starting with “Designing Egos,” my early works were the traces of my unconscious mind.  I recorded all the process of subconscious associations and thoughts, as if I was taking out my brain and exposing it through this series.  Everything from my dreams and imaginations to fantasies were expressed in my narrative drawings without any filters.  This particular series is an accumulation of my pure drawings as a result of automatism which is the avoidance of conscious intention in producing works of art.

Ahlfoundation:  How did you start folding the drawings into these brain like shapes?

Eunhyung Kim: My usual practice starts from a series of unconscious drawings.  When I was in Chicago, I studied at the Art Institute of Chicago.  I was contemplating how I would translate my drawings into one solid work in the drawing class with Professor Candida Alvarez.  At that time, the professor suggested to sweep out everything I think from my brain.  I expressed everything that came up to my mind and it was as if I took the brain and spread my brain onto the paper.  I crumbled the paper and each crease defined the stream of thoughts and gave an isolated/ confined area to store different thoughts.  As a result, the crumbled paper was tangled with stories and fragments of my subconscious mind.  The shape of this ridge produced on paper resembled the brain.  This brain like shape is made purely with one entire piece of paper without cutting or gluing the pieces together.  After many trials, I found the perfect weight paper that didn't unfold the creases.

Ahlfoundation:  Can you tell us about your project after you returned to Korea?

Eunhyung Kim: During my time in New York, I was able to watch a lot of operas at the Metropolitan Opera.  To me, opera was the source of establishing and reflecting my own identity as an outsider to this new city.  After graduating from the art school in Chicago, I lived everyday as if I was a bohemian character in one of the operas I watched.  I was especially touched by the artist’s stories in "La Boheme."  The Lincoln Center became my favorite and the most adored place in New York.  It is the Lincoln Center that made me realize how affectionate this city would be for me.  In my opinion, opera is the culmination of highest form of art therefore it was the opera that enabled me to experience music, dance, performance, and costume all at once.  This indirect experience of multiculturalism and various historical backgrounds gave me an opportunity to be immersed  into the specific situations or even to become particular characters.  It struck me with this parallel experiences of my identity trying to survive in New York City where all the nationalities are mixed together as if the characters in the operas were re-telling my experiences as an alien who is trying to fit-in.

After I returned to Seoul, I had the first come-back show related to classical music and opera.  The show “Moussorgsky, Pictures at Exhibition” was focused on Modest Moussorgsky’s famous piano composition that has 10 pieces featuring different themes through my attempts to re-interpret each theme.  Moussorgsky composed "Pictures at Exhibition" where he showcased these 10 pieces of music in remembrance of Viktor Hartmann, Moussorgsky’s dear friend and an artist.  Particularly, Mourssorgsky’s selection resembled curatorial process (curating) in contemporary art.  I focused on re-telling of the ten pieces and accentuating what was remembered from the original and what was inserted through the process of my own re-interpretation.  This free-flow of re-telling was captured in monochromatic scheme.  Through this absence of colors, the spectators were invited to read freely my visual interpretations and drawings.  While I used various colors in my earlier works, in this specific show, I paid attention to the process of virtual automatism.

For instance, No. 4 “Bydlo” is a Polish word that means “a cart with enormous wheels drawn by a cow" and represents “oppressed people like animals” which directly connotes suffering from tyranny.  However, Hartmann did not portray oxen itself but drew the oppressed individuals.  As I was re-interpreting the imagery from this music piece, I decided to include the imagery of oxen.  I thought of “White Ox” by Lee Jung Seop who is a prolific Korean artist who portrayed the turmoil during the period of Japanese Occupation and Independence of Korea.  The oppressed in Poland reminded me of the oppressed in Korea.  The symbolic use of oxen was the representation of both countries’ suffering and tragedy of each nation.   Ironically, during the time I lived in New York, the ox was the symbol of rising of stock market and trading which exemplified optimism and confidence of the market in the Wall Street.  I inserted iconic images such as Gargamel in “The Smurfs” associating with socialism and a tyranny and Statue of Liberty as capitalism.

Ahlfoundation: For many years you have been focusing on the theme based on the operas.  How did you start getting inspiration from operas?

Eunhyung Kim: I frequented all kinds of operas during my stay in New York.  The Met was the best internationally and I was mesmerized by the world of opera.  I almost dissected every performance and act of the opera and became addicted to every single piece.  Among all the operas, I was deeply touched by Puccini’s "Turandot" at the Met; it is the exemplary form of highest art that cannot be compared with art exhibitions or even any kinds of performance.  Current trend in opera is not so much of European classics but "Turandot" is a rich integration of the classics.  I watched over 50 pieces of operas and musicals altogether while in New York and it became natural to me to use them as inspirations in my artwork.  Time to time you can find inexpensive tickets as well so listening to music became my habit.  It was only natural for me to create artwork based on classical music and opera.  Among them, "The Ring Cycle", "Der Ring des Nibelungen" is four operas linked together by Richard Wagner who was a German composer.  I watched it at the Metropolitan Opera.  I created the artworks based on the musical inspirations and translated them into visual form.  I had a privilege to show my works as one of 10 winners at Joong Ang Fine Arts Prize.  For this show, I made mural installations and 2D reliefs while re-interpreting each chapter of the opera.  The size of each drawing was similar size with comic strips so that they are more readable at a glance.

Ahlfoundation: Do you have specific reason why you showcase mural installations?

Eunhyung Kim: I usually include mural pieces along with the smaller works in size to emphasize certain moments.  I use the projector to have baselines and then casually go over the lines with a big brush to accentuate free strokes.  I intentionally leave the drips and splashes. These marks create the ambiance that the viewers are inside of my brain.  As they walk around the big brain of the exhibition space, they will notice more details and continue with the narratives.
I started incorporating murals during the Skowhegan Artist Residency Program.  I took fresco class and I realized Asian ink art could be extended and translated into fresco as well.  I wanted to accentuate the feeling of being in the sketchbook.  The drawings you would see in the actual artworks are copied directly onto the wall by using the projector.  It is hard to bring out the intricate hand gesture with the large scale murals over 4 meters so I prefer using a projector.

Ahlfoundation: What is the reason behind for you to study abroad?
Eunhyung Kim: It became a trend to study abroad after advanced studies in Korea.  During the time I was finishing off the bachelor’s degree and master’s degree, I had vague ideas that I would study outside of Korea.  When I was younger, I watched a lot of MTV music videos and I was a big fan of Transformers.  I think I had fantasy around American culture due to this childhood exposure.  Interesting thing about the international student population in Korea these days is there are a lot of students from Europe and China.

Ahlfoundation: Can you tell us about your work before the time in the US and after you came back from your study in the State?

Eunhyung Kim: Before I went to study abroad, I used to do fabric drawing series.  Utilizing fabric pieces, I made works by stretching and crumbling as if I paint with fabric.  At this time, I used a lot of color schemes as well.  I majored in Asian Art and my focus was to re-interpret the tradition instead of delivering personal narratives. The turning point for me to come back to Korea was when I was offered a teaching position at an art college in Seoul.  While I was teaching, I was able to achieve the doctoral degree from 2013 to 2015.  It took me another 3 years to complete my doctoral thesis.  My time in New York was an experimental period based on the drawing method.  After I came back to Korea, I translated the past drawings into ink paintings.  In the series “Cerebral Planet,” I used the method of scribbling and inserted the analysis of the opera.  For instance, in the work I produced based on the opera “L'elisir d'amore,” I often made comparisons with Josun Dynasty (Korea) paintings and Goong Joong Hwa which showcases the full compositions unlike the stereotype of Asian painting which leave the empty space as a “breathing space.”

Stemming from Tang Dynasty (China) “Il-Pum-Hwa-Poong” which highlights the creative spirit revealing each artist’s individuality without tying too much of the tradition.  I purposely exemplified this individualistic approach in Asian art.  Both Eastern and Western cultures embrace the method of studying the masterpiece by making replicas.  I started by studying the traditional works and recaptured my interpretation of them with my own gestures.  This method of reinterpretation of the traditional art is called “Bangjak.”  I heavily utilized such traditional methods which encompasses a variety of themes.

Eunhyung Kim: Installation reliefs and the pencil drawings are finished with acrylic finishing spray which prevents the work from yellowing and smearing.

Ahlfoundation:  Do you experience slumps?  How do you overcome it?

Eunhyung Kim: It doesn’t come specifically as a slump but it comes and goes as I practice as an artist and the fact that there is no specific future for an artist becomes my slump.

Ahlfoundation: What is your future plan?

Eunhyung Kim: I want to take time to look back on what I have created and work on new project with animation and colors.
Eunhyung Kim 김 은형
August 2019